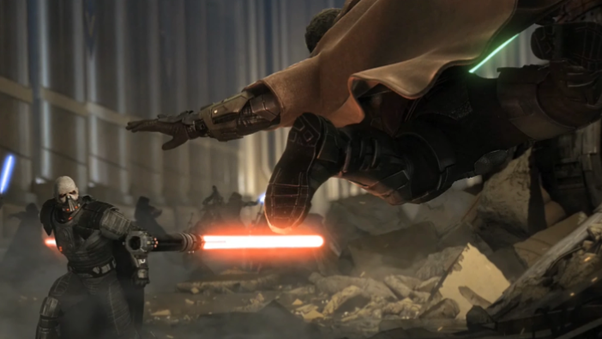 There are many different lightsaber combat forms used by both Jedi and Sith alike.

If you are looking to take your role play, combat, or cosplay to the next level, you need to understand how the iconic characters from Star Wars used their lightsabers.

The Basics of Lightsaber Combat

The lightsaber is defined by two factors. Firstly is the odd balance of the weapon. With all the weight being in the hilt, force sensitive warriors learned to move freely and deliberately with their weapon.

The second major factor is the omni-directional cutting blade. Unlike metallic swords, the lightsaber cuts equally well from all directions. This too informed lightsaber combat styles.

In the early days of Star Wars, the Makashi style was dominant. When Dark Jedi and rogue force sensitive warriors ran the galaxy, it was common for this dueling-focused style to take center stage. This style focused on one on one duels between two force sensitive warriors. As lightsabers, force users, and dueling became increasingly rare, this style gave way to one we are more familiar with.

The Star Wars movies focused closer on styles similar to Soresu. This combat style was focused on confronting opponents who wielded blaster weapons. All the famous action scenes of our heroes deflecting shots from blasters showcase the power of this technique.

While the Jedi may be some of the best lightsaber duelists in the galaxy, the Sith have a few tricks up their sleeves.

The Sith are known for their innovative and efficient fighting styles. While the Jedi focused on style and form, the Sith were known for brutal efficiency.

Sight lightsaber fighting styles are heavily informed by Sith technology. The red lightsabers so commonly associated with Sith warriors had the unique ability to occasionally break the beam of other lightsabers. This made combat with a Sith warrior all the more dangerous.

The most iconic Sith fighting style was created by Darth Vader. Given the limitations imposed on him by his heavy mechanical suit, Darth Vader had to forgo the traditional dueling styles and craft something unique to himself. Vader dug into lightsaber combat history and created a style that combined force use, brutal strength, and archaic techniques to overwhelm his opponents with unstoppable technical mastery. Even the greatest Jedi could barely stand against his technique.

Keep learning about these iconic styles and one day your lightsaber combat forms will be listed amongst the greats!